The Wages of Debt

Here’s an excerpt from our latest report, written by Sergio Marxuach, on the worrying trends regarding Puerto Rico’s public debt. The full report can be accessed here. We have also posted a brief interview, in Spanish, that explains the nuts and bolts of the report.

Puerto Rico’s public finances are on an unsustainable path.  As shown on Table 1 below, during fiscal year 2009 Puerto Rico’s total public sector debt, for the first time in recent memory, was equal to the island’s Gross National Product (GNP). 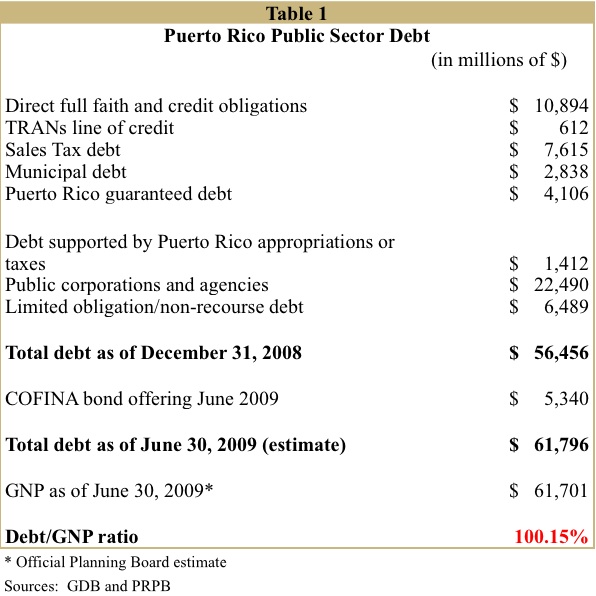 Economists consider this an important benchmark because if the ratio of debt-to-GNP continues to rise at a rapid pace, lenders may become concerned about the financial solvency of the government and demand higher interest rates to compensate for the increased riskiness of holding government debt.  Eventually, if the debt-to-GNP ratio keeps increasing uncontrollably both foreign and domestic lenders may not provide enough funding for the government to meet its obligations.  By then, whether the government resolves the fiscal crisis by raising taxes, cutting spending, or going into default, economic growth will be seriously disrupted.

As shown on Figure 1 below, the explosion in Puerto Rico’s debt-to-GNP ratio is a relatively recent phenomenon.

We should worry about Puerto Rico’s increasing public indebtedness for various reasons.  First, deficits and increasing public indebtedness to finance them depletes saving for our future.  National saving provides capital for private and public investment and is necessary for economic growth and rising living standards.  National saving is made up of private saving plus public saving by the state and local governments.  Private saving equals business saving, from profits, plus personal saving from income not spent on consumption.  Public savings, in turn, equals surpluses minus deficits; therefore, surpluses add to public saving and deficits subtract from it.  In Puerto Rico both government saving, due to recurring deficits, and personal savings, due to excess consumption, currently are negative; while business saving has remained fairly constant over the last decade.  So, everything else being equal, by accumulating deficits and devoting ever greater amounts to payments on the public debt we are crowding out investment on other things.  In other words, instead of supplementing private investment, government debt offerings actually substitute for other capital investments.

Second, the reduction in national saving will raise domestic interest rates.  Most economists agree that greater government borrowing would raise interest rates and lead to greater private saving, at least in the short term.  But the offset would be far from complete, so national saving would decline.  That decline would in turn reduce investment in Puerto Rico but not on a one-for-one basis (at least initially), because higher interest rates would attract foreign capital to Puerto Rico and perhaps induce local investors to keep more of their money at home.  However, as real investment is displaced by government debt, GNP would grow more slowly and eventually decline.  In the longer run, as the debt continued to grow and unless the interest premium was very large, capital would probably flee Puerto Rico, further reducing investment.

Third, beyond reduced national savings, increased interest rates, reduced investment, and reduced economic growth, sustained indebtedness has other pernicious effects.  Economically and morally, long-term debt issued today represents a claim on the earnings of future generations.  In some cases this is not necessarily bad.  For example, if we issue long-term debt today to finance the construction of a toll bridge with a useful life of forty or fifty years, then it makes sense for the financial burden to be shared with future users because they will also benefit from using the bridge over the next half-century or so.

The problem arises when we issue long term debt to finance current or past consumption.  That is the equivalent of going on a shopping spree with a credit card today and telling a two-year old toddler that he will have to foot the bill twenty years from now.  Unfortunately, that is precisely what we are doing today by issuing all that long-term extra-constitutional debt, “limited recourse debt” and sales tax debt.  Most of the proceeds from those bond offerings have been used to settle old debts or to finance current operational expenses but not to fund long-term assets.  However, it should be clear for all to see and none to misunderstand that borrowing only serves to postpone the time when taxes will have to be paid.  Therefore, we should be mindful of the moral consequences of what we are doing: we are reducing our children’s and grandchildren’s future living standards by pledging a significant part of their future income to pay for the recklessness and spendthrift ways of previous government administrators.  Those are the wages of debt.

It would be unfair to single out any one government or administration and blame it for this mess.  The simple truth is that the current state of affairs is the result of decades of bad, irresponsible decision making.  However, that fact is not sufficient to collectively exonerate us from guilt, because in the end, if, as Dietrich Bonhoeffer has said, the ultimate test of a moral society is the kind of world it leaves to its children, then all of us in Puerto Rico have failed that test miserably.