CPR for a Flatlining Economy

Recently released economic data for Puerto Rico present a significantly deteriorating economic picture.  The Puerto Rico Labor Department reported that the unemployment rate for the month of July was 16.5%, the highest level in 16 years.  If we take into account the unemployed who are not looking for jobs, the so-called discouraged workers, and those who are underemployed, who desire to work full time but can only find part-time work, the island’s unemployment rate would probably approximate 25%.

Perhaps more worrisome is the announcement by the Puerto Rico Planning Board that the economy contracted by 5.5% in real terms during fiscal year 2009, which ended on June 30.  This is the worst performance of Puerto Rico’s economy since modern national income accounts were implemented in 1947.  So, the recession in Puerto Rico is deep and showing no signs of abating.

In contrast, however, recently there has been a lot of talk among U.S. economists about “green shoots” and “seeing the light at the end of tunnel”, popular ways of saying that the worse of the current recession is over and growth will probably resume late this year or early 2010.  But in Puerto Rico, as we have seen, economic indicators continue in negative territory.  If this divergence continues and the U.S. and other large economies start growing early next year, while Puerto Rico is still mired in a recession, then we run the risk that higher interest rates and higher oil prices may quash the recovery in Puerto Rico and push our economy into a steady state of long-term stagnation.

The traditional prescription for getting out of a recession is to increase government spending.  The reason for this is simple.  As every college freshman learns in his basic introduction to economics, GNP = C+I+G+NX, where C is consumption, I is investment, G is government spending, and NX is net exports.

In a recession consumption can not be counted to lift up the economy for two reasons.  First, aggregate spending power diminishes naturally when there is increasing unemployment.  And, second, people tend to increase savings, and further reduce consumption, during recessions.

Similarly, private investment is unlikely to pick up the slack because there is no consumer demand for maintaining or increasing production relative to pre-recession levels, so businesses have no incentive to increase investment.

Finally, in a global recession such as the one we are going through, exports will also fail to lift up the economy precisely because there is a worldwide downturn in demand.  In any event, the export sector in Puerto Rico is dominated by U.S. firms with little or no connection to the local economy.

During the recent recession in Puerto Rico, however, the government could not implement the Keynesian recipe in full due to the weak state of its government finances.  As is well known, Puerto Rico is suffering a severe fiscal crisis, the result of bad decisions made over the last 20 or 25 years.  In order to address this situation the government had to implement policies to reduce the long-standing deficit, which is precisely the opposite of what Keynes recommended to stimulate growth.

As an alternative, the current administration has engaged in a complicated policy minuet.  On one hand, the government is cutting back on government spending and raising taxes, while on the other it simultaneously seeks to stimulate the economy through (1) a $500 million local stimulus package; (2) a $6 billion federally-financed stimulus package; and (3) promoting private sector investment through public-private partnerships.  In essence, the government is betting that the positive impact from the stimulus spending will outweigh the negative impact of the deficit reduction package.

The results of this mixed policy have been mostly negative so far.  The expenditure cuts and tax increases have already adversely affected the economy, while the effect of the stimulus has been marginal, at least until now.  The local stimulus plan is too diffuse and small to have any real impact.  Meanwhile, Puerto Rico has done well in terms of obtaining approval of ARRA funds but federal disbursement of the money has been slow and it remains to be seen whether local government agencies have the administrative capacity to spend it quickly while preserving the requisite controls to avoid waste and corruption.  Finally, the process for establishing public-private alliances has been slow and shows no signs of accelerating.

So what can we do?

In the short term, unfortunately, we do not have a lot of options, but are some things that can be done to improve our chances of jumpstarting the economy.

1. Appoint an economic reconstruction “czar” to be in charge of the process. As shown in the figure below, the process for disbursing ARRA funds is unduly complicated and bureaucratic.  There should be one person in charge, working on this full-time 24/7, reporting directly to the Governor.  This person should have broad powers, authority, and seniority to scream, bang the table and get things done.  It is extremely important to choose the right person for this job, otherwise we run the risk that an incompetent czar actually makes things worse. Simply put,  the economy is flatlining; we need someone in charge.

2. Focus spending on those areas with the greatest multiplier effect. Unfortunately, a significant portion of the ARRA funds are earmarked for consumption.  In Puerto Rico that kind of spending is unlikely to have a significant impact because we import most of what we consume; this is what economists call the “import leakage”.  Simply put, spending other people’s money (ARRA funds) on other people’s products (plasma TVs) is not likely to jumpstart economic activity in Puerto Rico.  Therefore, government spending should be focused on those areas with the greatest multiplier effect on the local economy.  As shown in the graph below, those are construction and agriculture.  In the construction sector we recommend focusing on roads, low-income housing, and hotels.  There are approximately $2 billion left over from the most recent COFINA bond offering that could be used for these purposes. 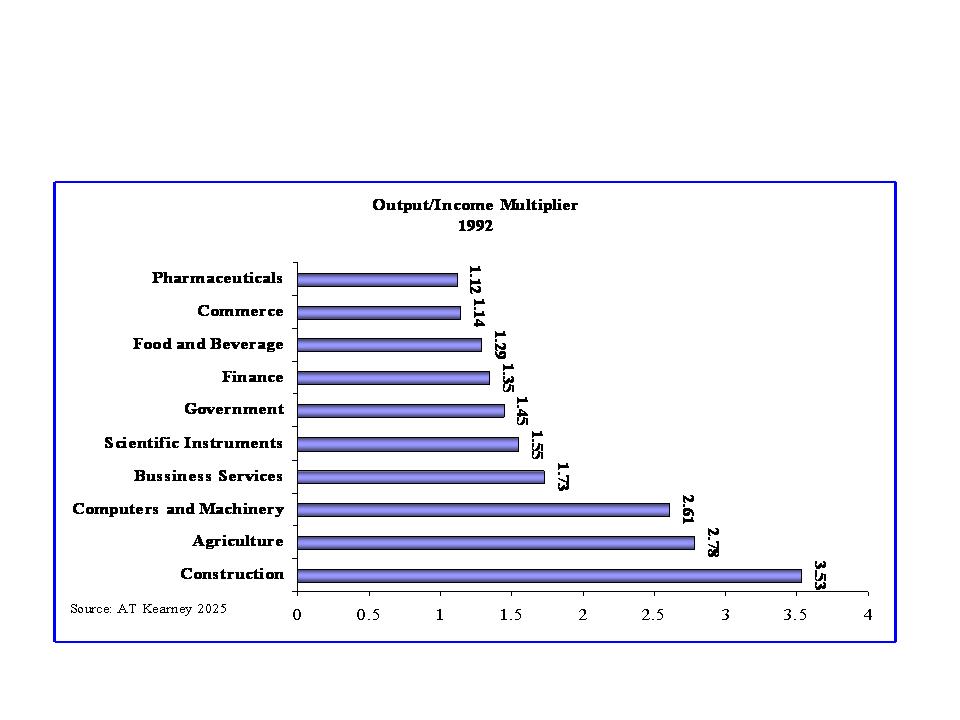 3. Finally, accelerate spending as much as possible. A recent analysis by Goldman Sachs warns that “tighter fiscal policy is baked into current law”.  This means that after contributing a substantial amount of growth through the next few quarters, the stimulus package will begin to fade and to exert a drag on growth later in 2010 (see graph below). Despite the fact that the government will spend substantial amounts on stimulus-related provisions through the second half of 2010, the effects will fade because (1) the rate of change in spending and tax cuts turns negative in early 2010, and (2) the second round effects of the stimulus package begin to fade later in the year. This fading stimulus is the most significant source of drag in 2011, withdrawing spending and tax cuts measuring about 1.3% of GDP. 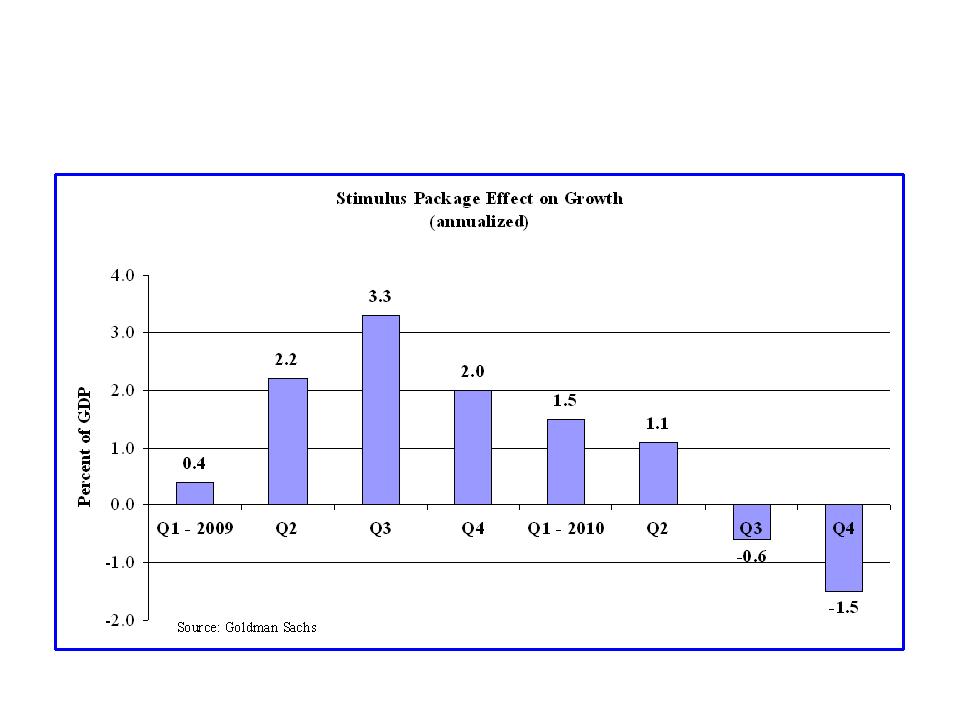 In sum,  in the short term, Keynesian stimulus will help and it will certainly not do any harm.  In the medium term, there is a need to implement other more comprehensive policies.   However, for any set of policies to work we need to take full account of our economic situation, without illusions or unrealistic expectations; roll-up our sleeves, and start rowing in the same direction soon. Otherwise, we run the risk of entering a state of long-term stagnation, with low growth and high unemployment.