Public Sector Employment and the Middle Class in Puerto Rico

Below is an excerpt from our latest report on the relationship between public sector employment and Puerto Rico’s middle class, written by Dr. Harold Toro and presented at the Annual Conference of the Puerto Rico Economists Association. The full report is available here. We have also posted a brief video commentary, in Spanish, which explains the most important findings of the report.

Current discussions on the impact of expected employment reductions in Puerto Rico’s government have emphasized aggregate macro-economic effects such as the potential contraction in aggregate consumption, and the risk of increased default levels in household debt.  However, there has been hardly any focus on the specific social sectors that would bear the brunt of the impact of such dismissals.  Additionally, the uncertainty regarding the timing, and magnitude, of public sector dismissals has made it difficult to analyze the potential micro-economic and social consequences of such a reduction.  Some analysts have suggested that the combined effect of balancing the budget, reductions in social spending, raising taxes, and public sector employment reduction would induce high levels of social instability in Puerto Rico.  These expectations, however, leave room for improvement, particularly regarding the evidence mustered to justify such conclusions.

Drawing on census data for 2007 I have examined the link between sector employment and middle class membership.  I first examined the relationship between public/private sector employees, their earnings, and other demographic attributes of adult workers in Puerto Rico.  In the second part of the analysis I have documented the linkage of middle class families with public-sector workers.  In each instance census data provides strong support for the claim that public sector workers and their corresponding salaries provide key supporting props for middle class standing.   While both approaches are descriptive in aim, they provide the basis for further research into the link between the middle class and government employment.  A key stylized fact gives a sense of the strength of the link: 50% of married couple families with annual incomes between 30 thousand and 80 thousand, and with at least one regularly employed adult have at least one earner in the public sector. 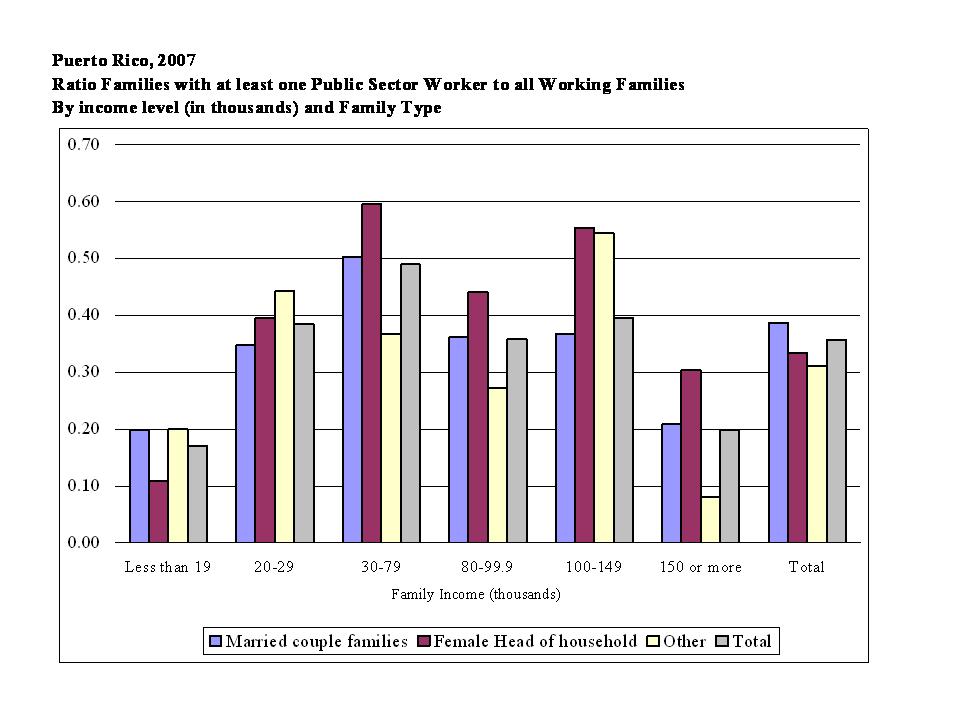 The figure above reflects cell-specific ratios of families with at least one public-sector worker for all families with at least one adult employed in Puerto Rico’s work force.  Note that except for the tails of the distribution of family incomes, 30 percent or more of families in each income-cell have at least one public sector worker.  As of yet it is unclear what will be the profile of terminated public-sector workers.  However, it is clear that the risk of affecting permanently the middle class is not small and neither are the consequences from an adverse shock to the middle class for Puerto Rico’s economic stability.