Moody’s to Factor Pensions in Ratings

The New York Times reports today that Moody’s, the credit rating company, will change its methodology to calculate state indebtedness to include unfunded pension liabilities.  Moody’s expects the change will lead to better disclosure of the states’ overall liabilities.

The more immediate effect, however, is a significant increase in state debt burdens.

As shown on the chart below, adding the unfunded pension liability to the states’ tax supported bonded debt results in higher debt burdens both as a percentage of state Gross Domestic Product (GDP) and in per capita terms. 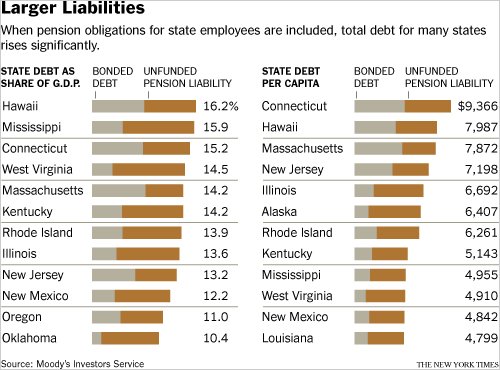 If we replicate the analysis for Puerto Rico, we find that the island’s debt burden is literally off the chart.  As shown on the table below, we estimate Puerto Rico’s tax supported debt (consisting of general obligation bonds, Commonwealth guaranteed debt, appropriation debt, and sales tax debt) to be around $30.6 billion.  To that amount we add unfunded pension liabilities (central government and teacher’s retirement system) of $23.7 billion.  Therefore, total debt equals approximately $54.3 billion. If we calculate Puerto Rico’s debt burden using the same benchmarks as Moody’s, we find that the ratio of debt to GDP in Puerto Rico is 56.7%, compared to 16.2% for Hawaii, which is the highest among the states.  If we use Gross National Product (GNP), a more accurate measure of real economic activity in the island, the ratio jumps to 86.5%.

In our opinion, any objective analysis of the data leads only to one conclusion: no matter how you slice and dice it, Puerto Rico is essentially insolvent.