Federal funds for rebuilding after a natural disaster are administered through a complicated patchwork of programs managed by a number of different agencies and subject to a myriad of rules and regulations. In general terms, the two main agencies involved are the Federal Emergency Management Administration (FEMA) and the Department of Housing and Urban Development (HUD).

FEMA programs are subject to the parameters established by the Stafford Act, which stipulates how aid is distributed for individual assistance, public assistance, and certain risk-mitigation programs, and how funds are employed for the management of those programs.

These programs, in turn, are divided into several sub-programs. For example, the category of assistance to individuals includes sub-programs to provide temporary housing, financial assistance, assistance for the purchase of furniture and household appliances, among other kinds of help. The public assistance program includes sub-programs for emergency assistance (debris removal, for example) and, in FEMA-ese, “permanent work” (repair and replacement of highways, bridges, parks, buildings, and other infrastructural elements).

HUD’s main program for assisting those whose property has been damaged or destroyed by a natural disaster is the Community Development Block Grant—Disaster Relief (CDBG-DR). These funds are divided into two main categories: “unmet needs” funds (for cases not satisfied by other assistance funds) and risk-mitigation funds.

In this blog, we’ll focus on how the disbursement of the funds allocated via FEMA’s public assistance program for permanent work and CDBG-DR are playing out in Puerto Rico.

The consensus in Puerto Rico is that the process for disbursing funds for permanent work for rebuilding is moving slowly. This is due in part to the federal bureaucracy and in part to special conditions that have been imposed on Puerto Rico.

For example, FEMA and the government of Puerto Rico “agreed” to use an alternative process for the disbursement of these funds, following Section 428 of the Stafford Act. According to a report published in September of 2018 by the Government Accountability Office (GAO), New York and New Jersey used this alternative process to finance a small percentage of the permanent work in those states after Hurricane Sandy, but no jurisdiction has used these alternative procedures to finance 100% of the permanent work under FEMA’s public assistance program. (See GAO Report 18-472.)

This alternative process consists of the following steps. First, the sites or infrastructure elements that were damaged and that qualify for the financing of permanent work under the public assistance program are identified. Second, a description of the extent and dimensions of the damage is prepared. Third, the “scope of work” necessary to repair the damage is analyzed and agreed upon with FEMA.

Once the project is approved, the funds for it are legally obligated or committed. These funds are administered by COR3, the Central Office for Recovery, Reconstruction, and Resiliency, which is in charge of overseeing the progress of the work undertaken and reimbursing the funds to the agency or company contracted to carry it out.

The process for approving permanent work projects was supposed to take 18 months from the date of publication of the guidelines for these projects, in April of 2018. That means that all permanent improvement projects should be approved by October of 2019. But that will almost certainly not happen. According to the testimony of Omar Marrero, then director of COR3, before the U.S. House of Representatives’ Homeland Security Sub-Committee, only 117 of 1,475 projects submitted to FEMA—7.9%—had been approved by FEMA as of July 11 of this year.

It will be almost impossible for the remaining 92.1% of those projects to be approved in just six weeks. The government of Puerto Rico has asked FEMA for an extension of that date, but so far, FEMA has refused—and in addition, any extension would have the effect of postponing the disbursement of certain CDBG-DR funds, as we will see later.

The slowness of these approvals is due in part to the fact that Puerto Rico must, mandatorily, use the alternative procedures, instead of voluntarily as in the States, and that FEMA has very little experience managing projects under Section 428. And perhaps more importantly, the version of the alternative procedures approved for Puerto Rico does not allow FEMA to accept estimates made by the applicant. Instead, the estimates must be done by professionals licensed by FEMA. This, too, is different from FEMA’s treatment of the states. (See “Public Assistance Alternative Procedures [Section 428], Guides for Permanent Work, FEMA-4339-DR-PR. Appendix A, April 2018.)

As for the CDBG-DR program, its moneys come from congressional allocations to the Community Development Fund. HUD then assigns funds to the various jurisdictions via notices published in the Federal Register. Once the notice is published, the jurisdiction has a fixed period of time (usually 60 or 90 days) to submit a Plan of Action for the use of those funds. The plan must be approved by HUD. Once approved, a Grant Agreement must be signed for the specific Action Plan. And only once that step has been taken does the process for obligating and disbursing funds for the plan’s projects begin.

In the case of Puerto Rico after Hurricane Maria, Congress has enacted three laws allocating CDBG-DR funds. The first was Law 115-56 of November 2017, which appropriated approximately $1.6 billion for “unmet needs” in Puerto Rico, mostly housing projects. These are funds now being used for the Home Repair, Reconstruction, or Relocation Program, also known as R3.

In February of 2018, Congress enacted Law 115-123, which appropriated Puerto Rico an additional $18.4 billion. Of that amount, some $10.2 billion was allocated for unmet needs (including $2 billion to improve the electrical system in Puerto Rico and the Virgin Islands) and another $8.3 billion for mitigation projects. Finally, in June of 2019 Congress passed Law 116-20, which assigned an additional $304 million for unmet needs.

On February 28, 2019, HUD approved an Action Plan to use $8.22 billion of the $10.2 billion assigned by Law 115-123 for unmet needs. (The difference corresponds to the funds assigned for the electrical system, which have not yet been the object of an official notification in the Federal Register.) However, as of the present moment, the Grant Agreement for the use of these funds has not been signed, due to unknown reasons.

Even more importantly, the disbursement of the $8.285 billion assigned by Law 115-123 for mitigation projects and the $304 million for unmet needs assigned in Law 116-20 is prohibited until Puerto Rico reaches an agreement with FEMA, within the calendar established by FEMA, on all the fixed-cost estimates for permanent work projects. (see Law 116-20, Section 1102.) 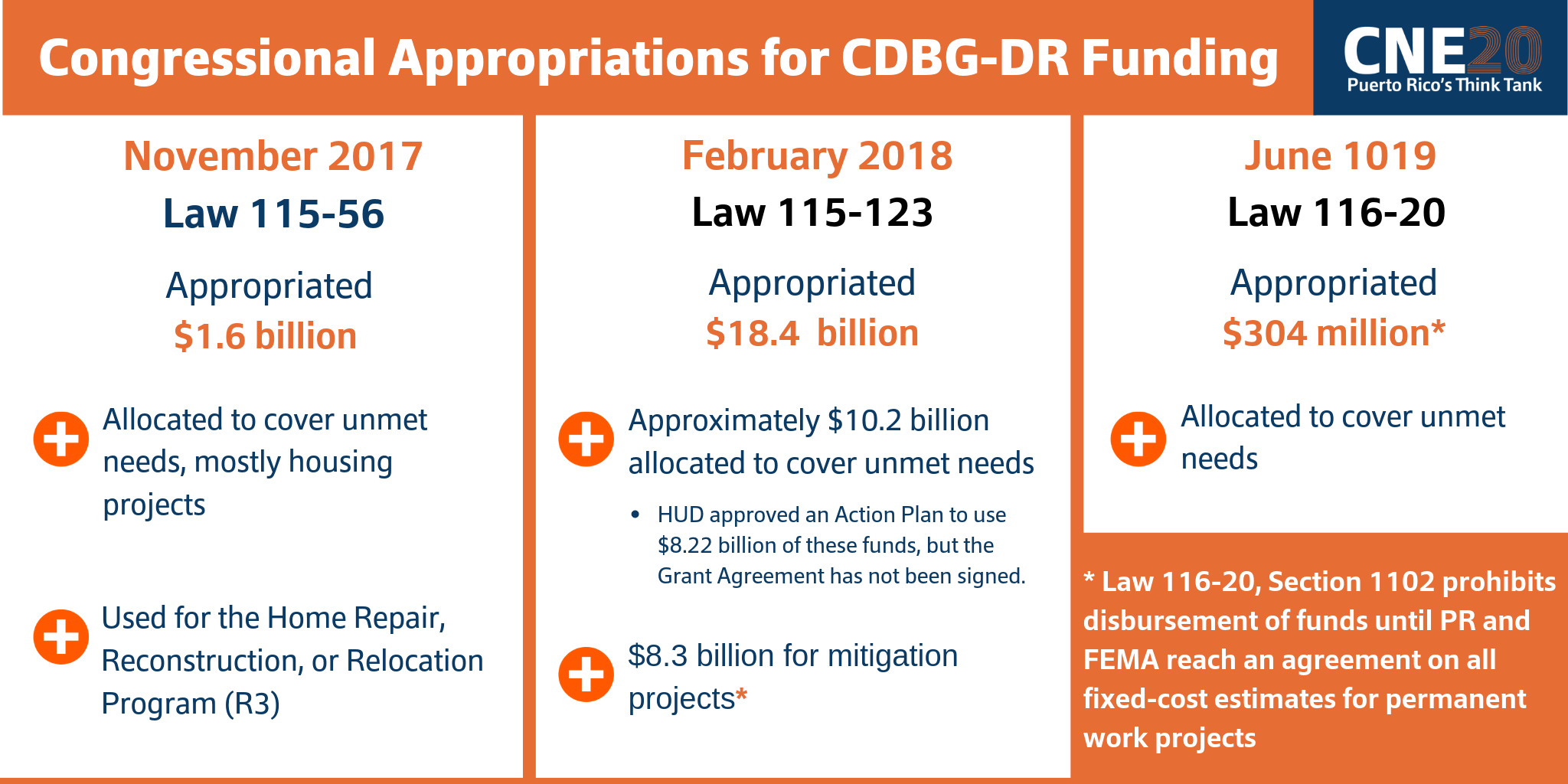 We do not know why Congress decided to impose this additional restriction on the disbursement of these funds, but it clearly puts Puerto Rico in a difficult situation: If FEMA does not extend the period for the approval of permanent work projects, there will be hundreds, perhaps thousands, of projects without financing, while if the period for approval is extended, the disbursement of some $8.6 billion in CDBG-DR funds will be delayed. To the best of our knowledge, this condition has been imposed only on Puerto Rico and the Virgin Islands.

Finally, on August 2, 2019, HUD announced that it is going to appoint a financial monitor to oversee the disbursement and use of all CDBG-DR funds assigned to Puerto Rico for reconstruction projects. Therefore, it is reasonable to conclude that the disbursement of those funds will be paralyzed until that appointment has been made.

In conclusion, the reconstruction of Puerto Rico and the economic recovery and growth tied to that reconstruction will be slower than anticipated. This delay is attributable to the federal bureaucracy, the use of alternative process which have so far not functioned as expected, and the discriminatory, burdensome, and unreasonable conditions imposed by the Congress, FEMA, and HUD on Puerto Rico.

A shortened, Spanish-language version of this column was published in El Nuevo Día on September 15, 2019.