Listen to the column below

The earthquakes that impacted Puerto Rico in the recent weeks have once again highlighted the fragility of Puerto Rico’s electrical system. Unfortunately, the cacophony generated by government propaganda and recriminations about the poor response after the earthquakes have diverted attention from five important processes that are taking place at the same time, each of which will affect the future of Puerto Rico’s electrical system.

At this time, PREPA’s Integrated Resource Plan (IRP) is under review by the Puerto Rico Energy Bureau (PREB); PREPA is trying to modernize and reconfigure Puerto Rico’s power grid as part of the island’s comprehensive reconstruction effort; the Fiscal Control Board has certified a Fiscal Plan for PREPA; the terms of PREPA’s debt with its bondholders are being renegotiated under PROMESA’s Title III; and the government of Puerto Rico has begun negotiations to transfer the operation of the electricity transmission and distribution system to a private entity and the process to do the same with the generation fleet will begin soon.

In a country where things are done well, these processes would follow a logical sequence to obtain the best possible results. Living in Puerto Rico, it should not surprise us that there is little or no coordination between these processes, to the detriment of the people and the benefit of particular interests. 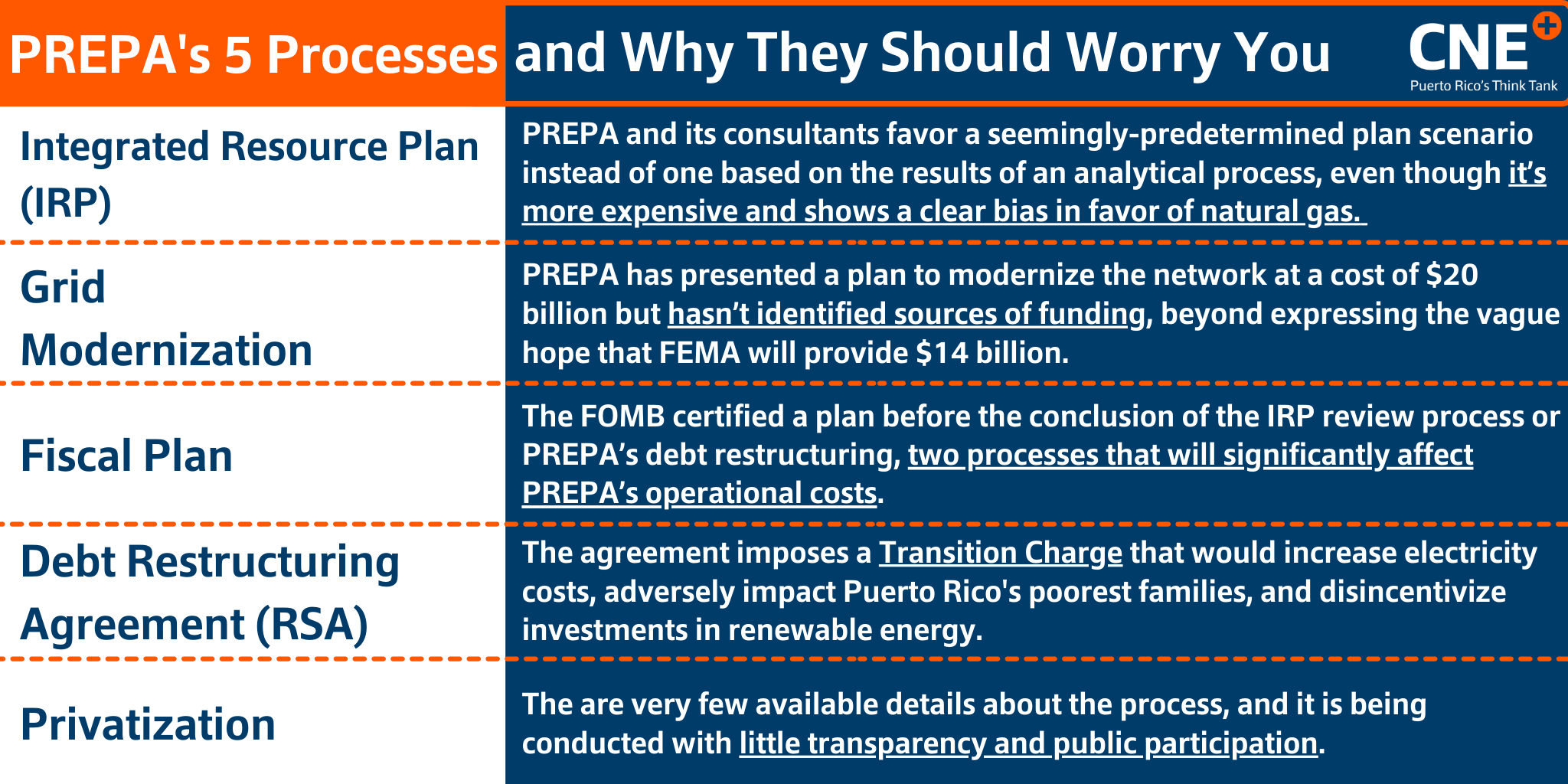 The first step should be the approval of the IRP by the PREB. The IRP is a long-term plan, usually twenty years, that outlines the necessary elements – capital investment, generation technology, human resources, among others – to implement the public energy policy of a jurisdiction. The draft IRP submitted by PREPA contains several deficiencies, many of which have been identified by different entities.

The main problem is that the favored scenario for the system’s modernization seems to be predetermined instead of being the result of an analytical optimization process. The consultants who prepared the IRP draft, the Siemens Company, analyzed several strategies and scenarios and determined that the plan called “S4S2” that projects that by 2038 Puerto Rico would have a solar generation capacity of 2.8 GW and a natural gas generation capacity of 1.4 GW, at an estimated cost of $14.35 billion, would be the optimum for Puerto Rico.

However, PREPA required that Siemens include another scenario, designed by PREPA, called “energy system modernization” (“ESM”). Under this scenario, in 2038 Puerto Rico would have a solar generation capacity of about 2.6 GW and a natural gas generation capacity of 2.2 GW at a cost of $14.43 billion. Siemens recommends this scenario, without providing a clear explanation, although it’s more expensive and shows a clear bias in favor of natural gas traffickers, in violation of Puerto Rico’s energy policy.

Worse of all, both Siemens and PREPA are discarding the “S3S2S8” scenario under which Puerto Rico would have a solar generation capacity of around 4.1 GW and a natural gas generation capacity of 1.1 GW in 2038, at a cost of $14.36 billion. The document does not set forth a clear justification for favoring the ESM over the other two scenarios described. We must question why PREPA insists on advocating for a scenario that promotes gasification at levels that are less cost effective than other feasible scenarios, which include a larger amount of generation from renewable sources.

The second step should be the reconfiguration of the transmission and distribution system to make it more resilient and to incorporate distributed generation around the island, a process that could take a decade. PREPA has presented a plan to modernize the network at a cost of $14 billion but hasn’t identified the sources for funding it, beyond expressing the vague hope that the federal government will assume the costs, through FEMA. Nor has it explained how such financing could be affected by its intention to privatize the administration and operation of the grid.

Developing a five-year Fiscal Plan for PREPA should be the third step in this process. However, the Board has already certified a plan before the IRP review process has concluded or the restructuring of PREPA’s debt is completed, two processes that will significantly affect PREPA’s operational costs. Even more concerning, PREPA incorporates elements of the ESM into the Certified Fiscal Plan, even though the PREB has not completed its evaluation and much less approved the IRP.

The Fiscal Plan, at some point, will have to be amended to incorporate the service of PREPA’s restructured debt. PREPA and the Board have proposed a Restructuring Support Agreement (“RSA”) that imposes a Transition Charge that will structurally increase the future cost of electricity in Puerto Rico, as it increases by 64% during the term of the new bonds. According to an analysis by Dr. Ramón Cao, this charge would negatively affect economic growth, reduce employment, and increase inflation.

In addition, the Transition Charge would function as a regressive tax, which would adversely affect the finances of the poorest families in Puerto Rico. According to a study by Dr. Héctor Cordero, some families would have to allocate 42% of their monthly income to the payment of the electricity bill. This will wreak havoc on the monthly budget of thousands of Puerto Rican families. In addition, this sun tax would be a disincentive to use renewable resources for electricity generation, in contravention of the public policy and laws of Puerto Rico.

Finally, PREPA has provided very few details about the process to privatize the administration and operation of the grid. The little we know is worrisome since it closely resembles the scheme that failed twice at PRASA. In addition, PREPA has not explained what incentive the federal government has to spend $14 billion on modernizing Puerto Rico’s power grid, only to put it in good working condition so a private entity can come in to maximize its profits by managing it.

Something just doesn’t add up here. The only thread connecting these five processes is an inexplicable bias in favor of natural gas, despite the fact that public policy and the laws of Puerto Rico order a transition to a less centralized generation system based on renewable sources. PREPA has to explain why it supports an IRP that disproportionately increases generation capacity with natural gas in violation of Puerto Rico’s laws.

On the other hand, one of the conditions for the RSA approval is that the Puerto Rico Legislature exempt the entity that will issue the new bonds from the application of 16 laws. I recommend that senators and representatives think carefully about how they will vote when they have this matter before their consideration. The people will be watching.

This column was originally published on January 26, 2020 in El Nuevo Día.