CNE continues to receive messages of support and questions of how to best help Puerto Rico. Despite the lack of power and water in many areas, businesses are open and have enough supplies to cover local demand. We encourage everyone to buy local.

The Puerto Rico Recovery Fund has worked on three strategic and interrelated areas after the extensive devastation caused by Hurricane Maria:

Your donation will help us continue that work now, after Hurricane Fiona.

As the waters literally begin to recede, we are starting to get a better picture of the damage caused by Hurricane Fiona. One question I have been asked several times over the last few days is why the damage is so bad if Fiona was “only a category 1 storm”. While it is true that Fiona ranked in the lower end of the scale meteorologists use to evaluate tropical storms, that is both the wrong way to analyze what happened and also the wrong question to ask.

The Saffir-Simpson Hurricane Scale is based only on a hurricane’s maximum sustained wind speed. It does not take into account other factors that could intensify the impact of the hurricane, for example, the amount of rain that could fall on any given location, any storm surge related to the hurricane, or the weather system’s translation speed. Hurricane Fiona poured an estimated 1 trillion gallons of water on Puerto Rico and it was moving very slowly, at approximately 8 miles per hour. That’s why we have seen such catastrophic flooding across the island.

Perhaps more important, as my colleagues who teach planning at the University of Puerto Rico Graduate School of Planning explained to me after Hurricane Maria, the physical and social impact of a weather system is not only a function of the storm’s force or strength, it is also a function of a given society’s pre-existing level of vulnerability. Puerto Rico was extremely vulnerable prior to Fiona as only 30% of all permanent reconstruction work related to Hurricane Maria had started; thousands of people still lived in flood-prone areas; and basically nothing had been done to strengthen the electric grid or increase its resiliency. Given all of that, the right question to ask is why was Puerto Rico so vulnerable five years after Hurricane Maria. Several books could be written to answer that one.

Given that the response to Hurricane Fiona is barely beginning, it is difficult to provide hard data about damages. Here is a summary of some indicators we could gather from the official government information website:

As the emergency response continues it is important that the federal government provide adequate support to local and state authorities. After Hurricane Maria, federal assistance was provided with too many strings attached and oftentimes was not delivered effectively as evidenced by this report from the United States Commission on Civil Rights. The Biden administration appears, so far, to be more receptive to providing the necessary assistance to Puerto Rico and his personal history gives us reason to believe that he can identify and sympathize with the pain and suffering of others. We certainly hope that is the case.

The state of play in D.C. is constantly shifting, and we expect ongoing developments to impact both the immediate response to Hurricane Fiona and long-running disaster relief programs in Puerto Rico.

Here are three takeaways regarding the federal role in disaster recovery.

After an official request by Governor Pierluisi and calls from Members of Congress to provide greater support for Puerto Rico, President Biden authorized a Major Disaster Declaration yesterday to address the impact of Hurricane Fiona.

2. FEMA will likely play more of an auxiliary role and focus on recovery funding for Hurricane Maria.

FEMA’s capacity to address hurricane impacts is greater than in 2017. After one of the largest local hiring processes in the history of the agency, it now has roughly 700 staffers in Puerto Rico. Crucially, it does not have to stretch resources across multiple disasters—as it had to do in September 2017 in the aftermaths of Hurricanes Harvey, Irma, Maria, and the California wildfires. FEMA Administrator Deanne Criswell has also committed to sending hundreds of additional staffers to help with the recovery.

This expanded capacity will not necessarily lead to greater involvement for FEMA than it had after Maria, however. The agency’s traditional role is to provide support to state and local governments rather than lead the relief and recovery process itself. Fiona did not cause Puerto Rico’s government to collapse, meaning that the Puerto Rico Emergency Management Agency and other key government institutions will play a more central role in the response.

Importantly, FEMA still has its hands full with the Hurricane Maria recovery. Per a GAO report published on September 15, FEMA obligated approximately $28 billion for Public Assistance and $162.7 million for Hazard Mitigation programs in Puerto Rico. As of August 2022, only about 19 percent of Public Assistance funding and 13 percent of Hazard Mitigation funding had been disbursed.
The gap between the obligation of FEMA funds and disbursement—when the federal government actually pays for a program—is a longstanding cause of concern for the post-Maria recovery. GAO analysts found that spending delays are due to many factors, ranging from a lack of institutional capacity to manage federal grants to difficulties in reaching agreements with FEMA on project scopes of work.

FEMA must also work to speed up the disbursement of the $9.4 billion in obligated funds to rebuild the electrical system. Anne Blink, Associate Administrator for FEMA’s Office of Response and Recovery, told a Congressional panel last week that the agency has only disbursed $40 million in energy grid funding so far.

3. Supplemental disaster funding may be coming down the pike — though the timing is not clear.

There has been significant chatter in D.C. about supplemental funding measures for Puerto Rico.

In a floor speech, Senate Majority Leader Schumer pledged greater support for the island. On the House Side, Rep. Nydia Velázquez and House Majority Leader Rep. Steny Hoyer have told the press that a supplemental package is in the works—although the timing is uncertain. 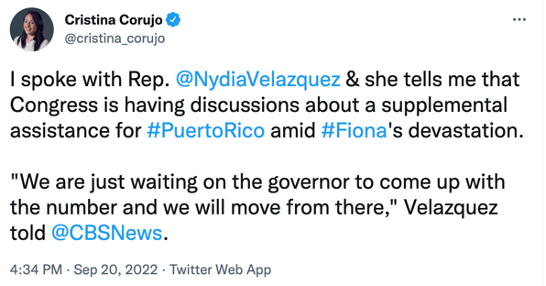 Federal relief efforts rely on FEMA’s Disaster Relief Fund (DRF). In the past, Congress has used supplemental appropriations to provide more funding for the DRF when needed.

The DRF currently has about $15 billion. It is unclear if this amount will cover the full cost of Fiona recovery—especially taking into account the damage to infrastructure such as roads, bridges, and urban centers. The likelihood of a supplemental appropriation may depend on whether the damages exceed available DRF funding, as well as whether or not officials in Puerto Rico advocate for the increased support.

CNE in the News