See all editions of the
Weekly Review

There has been a lot going on recently at the Puerto Rico Electric Power Authority (“PREPA”). This week we dedicate a special edition of the Weekly Review to highlight two recent transactions executed by PREPA that together could have a material adverse effect on Puerto Rico’s electricity sector.

First, we take a look at some of the shenanigans surrounding the agreement between PREPA and New Fortress Energy to supply natural gas to units 5 and 6 of the San Juan generation plant, a contract that has been approved by PREPA, the Puerto Rico Energy Bureau, and the Fiscal Oversight and Management Board. Yet, the Federal Energy Regulatory Commission (“FERC”) has just issued an order to show cause why the liquified natural gas (“LNG”) terminal at San Juan is not subject to the FERC’s jurisdiction and thus not required to obtain certain FERC permits to operate.

Second, we summarize some of the principal terms and conditions of the Operation and Maintenance Agreement for Puerto Rico’s Transmission and Distribution System executed among and between PREPA, the Puerto Rico Public-Private Partnerships Authority, LUMA Energy, LLC, and LUMA Energy Servco, LLC. We are working on an in-depth analysis of this transaction. Stay tuned.

Finally, this week is the fourth anniversary of President Obama’s signing of PROMESA. We provide you with a timeline of important events that have occurred since that consequential occasion.

Did PREPA Drop the Ball in Executing the Agreement with New Fortress Energy?

On June 18, 2020, the Federal Energy Regulatory Commission (FERC) ordered New Fortress Energy to “show cause why the liquified natural gas (LNG) handling facility it has constructed adjacent to the San Juan Combined Cycle Power Plant at the Port of San Juan is not subject to the Commission’s jurisdiction under section 3 of the Natural Gas Act” within 30 days.  The Order details several reasons why it appears that the construction and operation of the LNG facilities in San Juan are under FERC jurisdiction, and therefore New Fortress Energy should have received authorization by FERC prior to the construction of their facilities.

Just this past May 22, the Governor announced with great fanfare that New Fortress Energy (NFE) had completed the conversion of San Juan Units 5 & 6 to operate with LNG and promised that consumer electricity rates would decrease thanks to this project that included $100 million of private capital.  The contract between New Fortress Energy (Puerto Rico subsidiary NFEnergía, LLC) and the Puerto Rico Electric Power Authority (PREPA) was signed on March 5, 2019 for the supply of natural gas and conversion of Units 5 & 6 of the San Juan Combined Cycle Power Plant, yet problems arose from the start of this initiative.  A report published by IEEFA and CAMBIO in June 2020 titled “Is Puerto Rico’s Energy Future Rigged?” highlights the facts why the selection and contracting process was plagued with irregularities that provided an unfair advantage to New Fortress Energy.  Irregularities in the procurement process included PREPA receiving an unsolicited proposal from NFE and signing a Confidentiality Agreement with NFE and them having access to meetings and information before the Request for Proposals (RFP) was published and not disclosing this information to the other bidders, among other irregularities described in the report, presented an unfair advantage to NFE.

The NFE contract for $1,500,000,000 was approved by PREPA’s Governing Board, the Puerto Rico Energy Bureau (PREB) and the Fiscal Oversight and Management Board (FOMB), even though red flags were raised regarding the payment structure and differences in estimates of expected actual cost savings.  NFE’s claim to be able to complete conversion of Units 5 & 6 to LNG by the end of the second quarter of 2019 helped them become the selected proponent, yet as later demonstrated NFE was not able to complete construction as promised but 11 months later.  And it turns out they completed the construction of facilities without requesting formal FERC authorization.

Reports have surfaced detailing that NFE had informal pre-filing meetings with FERC and representations were made by NFE to PREPA that FERC did not have jurisdiction in this case. The NFE contract with PREPA makes NFE responsible for obtaining, maintaining, and providing permits from all federal, state, and local regulatory authorities necessary for the execution of its obligations under the Agreement.  Exhibit A of the contract details a listing of permits and obligations required, yet FERC Authorization is not included in this listing.  ¿How is it possible that PREPA allowed NFE to start construction without requiring FERC authorization or written waiver?  PREPA recently reacted to the press that it was NFE’s responsibility to obtain necessary permits.  Yes, it is the responsibility of NFE to obtain all necessary permits, but it is the responsibility of PREPA to perform proper administration and oversight of contract and supplier.  It is incomprehensible that this happened, especially given the fact that PREPA spends many millions of dollars on financial and legal counsel to advise on these matters.  It seems like many dropped the ball on this matter and accountability is needed.

Operation and Maintenance Agreement with LUMA

On June 22, the Puerto Rico Electric Power Authority (“PREPA”) and the Puerto Rico Public-Private Partnerships Authority (the “P3A”) entered into an agreement for the Operation and Maintenance (“O&M” Agreement”) of PREPA’s Transmission and Distribution System (“T&D System”) with LUMA Energy, LLC, and LUMA Energy Servco, LLC (collectively, “LUMA”). LUMA is a consortium formed by (1) ATCO Ltd., a Canadian operator of electric systems and (2) Quanta Services, Inc., a Texas-based provider of “infrastructure solutions” for the electric power industry.

GridCo and GenCo: The O&M Agreement requires the reorganization of PREPA into two operating companies: (1) GridCo, which will retain ownership of the T&D System, and (2) GenCo, which will retain ownership of PREPA’s generation assets, until they are otherwise disposed of. GridCo and GenCo are then required to enter into a power purchase and operating agreement (the “GridCo-GenCo PPOA”) providing for expense reimbursement, power delivery and other services related to the generation, sale and purchase of power and electricity from PREPA generation assets, in accordance with the term sheet set forth in Exhibit H. LUMA, in turn, will enter into an agreement to provide certain services to GenCo (the “GenCo Shared Services Agreement”) in accordance with the terms and conditions set forth in Annex VI. It is not clear to us how much money will LUMA be entitled to receive as compensation under the GenCo Shared Services Agreement.

Power Supply Dispatch and Management: According to Section 5.13 of the O&M Agreement, LUMA shall, among other things: “(i) dispatch, schedule and coordinate Power and Electricity from available generation assets and provide related services; [and] (ii) coordinate the scheduling of load requirements and Power and Electricity with IPPs pursuant to their respective Generation Supply Contracts and with GenCo pursuant to the GridCo-GenCo PPOA.” This is problematic for at least two reasons. First, it creates a conflict of interest for LUMA because, as we stated above, it will be providing GenCo with certain services pursuant to the GenCo Shared Services Agreement. Thus, it has an incentive to favor the interconnection of GenCo generation assets to the T&D System over other providers. Second, it creates a flawed market structure where a limited number of power producers (an oligopoly) would sell to a single buyer (a monopsony), see figure below. In the absence of (1) assertive antitrust regulation and (2) the management of the electricity market by an Independent System Operator to ensure that lower cost generators have preference in connecting to the T&D system, all sorts of strategic interactions among and between market players, including price-fixing via market signals, could take place. Therefore, these flaws in the market structure could negate any savings ostensibly generated by entering into the O&M Agreement. 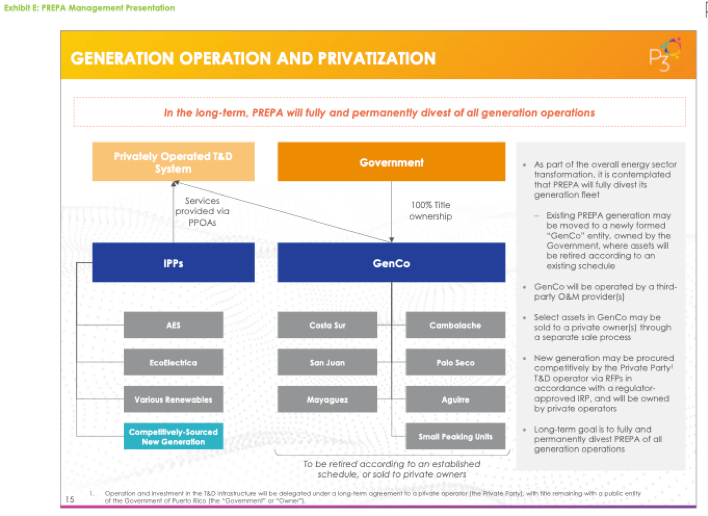 Savings Estimate is Deficient: The P3 Committee Report states that the present value (PV) of the Fixed Fee and the Incentive Fee over the 15-year term of the O&M Agreement is approximately $1.35 billion (P3 Committee Report p. 67). This means that entering into the O&M Agreement would be rational, from a purely financial perspective, if, and only if, the present value of the future savings to be generated by LUMA exceeds $1.35 billion. In simple mathematical terms, executing the O&M Agreement is financially rational if: the PV of Future Savings over 15 years > $1.35 billion (PV of the Fixed Fee and the Incentive Fee over 15 years). But the savings estimate included in the P3 Report is deficient. Exhibit B of the P3 Committee Report: Advantages of Third-Party T&D Operator of the Puerto Rico T&D System sets forth a savings “analysis” by FTI Consulting. 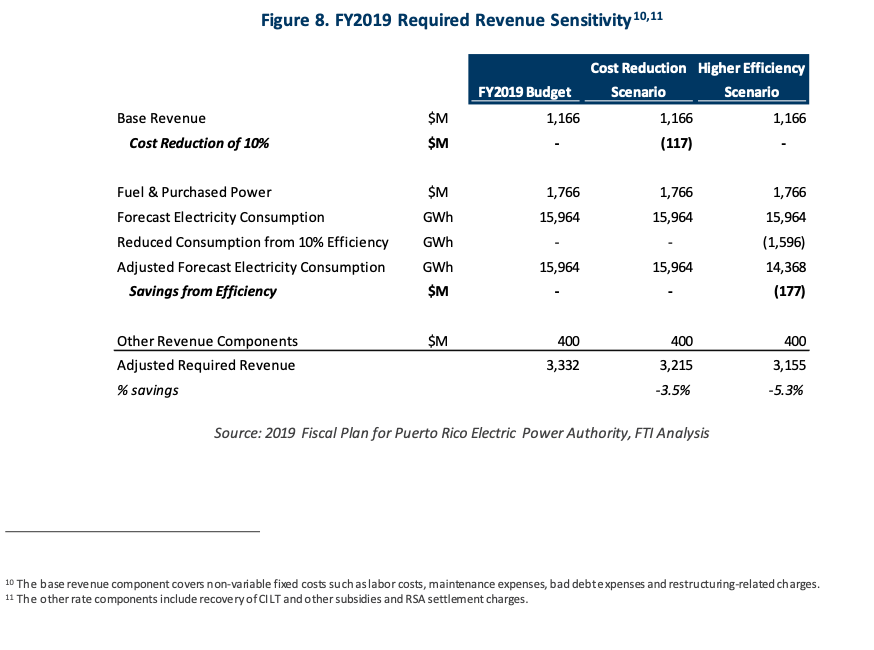 As shown in the table above, FTI estimated static savings for one year according to two scenarios. First, they assume “a 10% reduction in base revenue operating costs (non-variable costs such as labor costs and maintenance expense) due to new work methods and improved management practices implemented by the T&D Operator”, which they estimate will generate $117 million in savings. And, second, they present “a higher efficiency scenario [that] evaluates the impact of a reduction in the amount of fuel and purchased power required due to improved operations leading to reducing line losses”, and which they estimate will generate $177 million in savings. However, this type of “one-off” analysis does not provide us with sufficient information to determine whether the O&M agreement is a good deal for Puerto Rico.

In Case You Missed It

On June 30, 2016 the Puerto Rico Oversight, Management and Economic Stability Act, commonly referred to as PROMESA was signed into law.

As the law reaches its four-year anniversary, CNE has compiled a chronological overview of key dates and events related to PROMESA, and CNE’s response during this period.