We dedicate this issue of the CNE Review to our founding Chairman, Churchill G. Carey, Jr. Church was a towering figure in the housing field in Puerto Rico for many decades and an inspiration to all who knew him. CNE would not exist except for his generosity and support. Our work in the housing sector is a direct result of Church’s influence and is inspired by his passion for Puerto Rico. Church would have been 80 in July. He was a great friend and mentor and we miss him.

This month the CNE Review will take a look at some of the issues affecting the housing market in Puerto Rico. Housing is not just a place to shelter from the elements, as important as that function is. In the words of my colleague Raúl Santiago-Bartolomei, “housing provides the security and minimum foundation needed for the material well-being of families in Puerto Rico. It is also the basic unit that defines the social fabric of communities.”

Yet, for decades in Puerto Rico, there has been a deficit of safe, accessible housing for low and medium-income families. Even prior to the 2017 hurricanes and the 2020 earthquakes, households facing tenure insecurity and informal settlements were a common occurrence in Puerto Rico and shared several characteristics, such as lack of formalized land tenure, location in third party public and/or private land, as well as housing originally built as makeshift structures.

The natural disasters of the past few years have added yet another layer of insecurity to Puerto Rico’s already precarious housing situation. According to my colleague Deepak Lamba-Nieves, “the combined impacts of hurricanes Irma and María exacted a disastrous toll on Puerto Rico’s housing sector. Over 725,000 households reported damages to their dwellings, representing close to 60% of occupied housing units in the island.” Unfortunately, five years after the 2017 storms made landfall, little progress has been made in repairing the island’s damaged housing stock as shown in CNE’s Housing Reconstruction Monitoring Dashboard ­– an interactive and dynamic tool that provides detailed data, at the municipal level, on housing damages and reconstruction investments related to Hurricanes Irma and María. The Dashboard, created and maintained by CNE, enables the public to track the housing reconstruction efforts and raises awareness of the needed investments to effectively repair the widespread damage caused by the 2017 storms. This platform is an outgrowth of the first research project summarized below that focuses on analyzing the provision of emergency housing relief through FEMA’s Individual Assistance Program.

Finally, as you read about Raul and Deepak’s research about housing in Puerto Rico, keep in mind that housing markets are fiendishly difficult to analyze and understand. Remember that basic economy theory about how markets work assumes that goods and products in any given market are essentially fungible and easy to supply. Few goods can be further away from that premise than housing.

Indeed, the housing market in Puerto Rico has been out of balance for decades now. Again, in the words of Raúl, in the past “there was a surplus of market-priced properties that no one bought, and a deficit of social and affordable housing that no one was supplying. Today, there is a surplus of properties being bought at prices above appraisal and an even worse deficit of affordable and social housing that nobody is supplying.” Fixing that imbalance will be a long, complex endeavor.

Without further ado, I leave you with a summary of the important work Raúl and Deepak are undertaking in the housing area. I hope you find it thoughtful and informative.

The combined impacts of hurricanes Irma and María exacted a disastrous toll on Puerto Rico’s housing sector. Over 725,000 households reported damages to their dwellings, representing close to 60% of occupied housing units on the island. These storm damages came on top of a range of housing problems that have been developing over the course of many years. Land tenure and titling issues are common, partly due to the fact that Puerto Rico has consistently failed to produce sufficient affordable housing units for a large portion of the population. Increased production in certain segments and underproduction of social housing, over time, has led to a large number of vacant housing units, a growing affordability crisis, and very long waiting lists for public housing and Section 8 vouchers. Moreover, the vast number of homes located in flood zones, lacking insurance and built without complying with building codes increased the vulnerability of hundreds of thousands of families prior to the hurricanes making landfall.

Unfortunately, five years after the 2017 storms made landfall, little progress has been made to address the island’s housing needs. In fact, the situation has gotten more precarious, especially for low-income families seeking affordable homes, given a 22% increase in housing prices from 2018 until 2021. In past years, there was a surplus of market-priced properties that no one bought, and a deficit of social and affordable housing that no one was supplying. Today, there is a surplus of properties being bought at prices above appraisal, and an even worse deficit of affordable and social housing that nobody is supplying.

Since 2018, CNE’s Blueprint Initiative has provided a platform for productive conversations and knowledge exchanges on issues of land ownership, accessibility, and safe housing.  Given our dire housing situation, our primary objective is to bring together existing efforts and strategic thought partners to devise a collective roadmap for the reconstruction and beyond. To achieve this, we have been conducting research on a range of post-disaster housing topics, developing interactive tools, and organizing events for the wider public.

Below is a brief review of the ongoing and completed research we have been working on for the past years.

1. Who Gets Emergency Housing Relief? An Analysis of FEMA Individual Assistance Data After Hurricane María

In the months after Hurricane María’s devastation of Puerto Rico, press outlets and advocacy groups documented how Puerto Rico’s experience with housing repair and reconstruction programs was rife with complaints and inconsistencies regarding approval of applications and denial of support, especially among vulnerable communities. CNE produced a research paper, published in Housing Policy Debate, that contributes to the critical task of revealing post-disaster damages and reconstruction trends through a detailed examination of housing and personal property damages and benefits received through the Federal Emergency Management Agency (FEMA)’s Individual Assistance (IA) Program after Hurricane María. We also examined if housing needs were equitably addressed by placing attention on whether poor households, or those located in very vulnerable communities with inadequate infrastructure and precarious socioeconomic conditions, known locally as Special Communities, were unfavorably served. 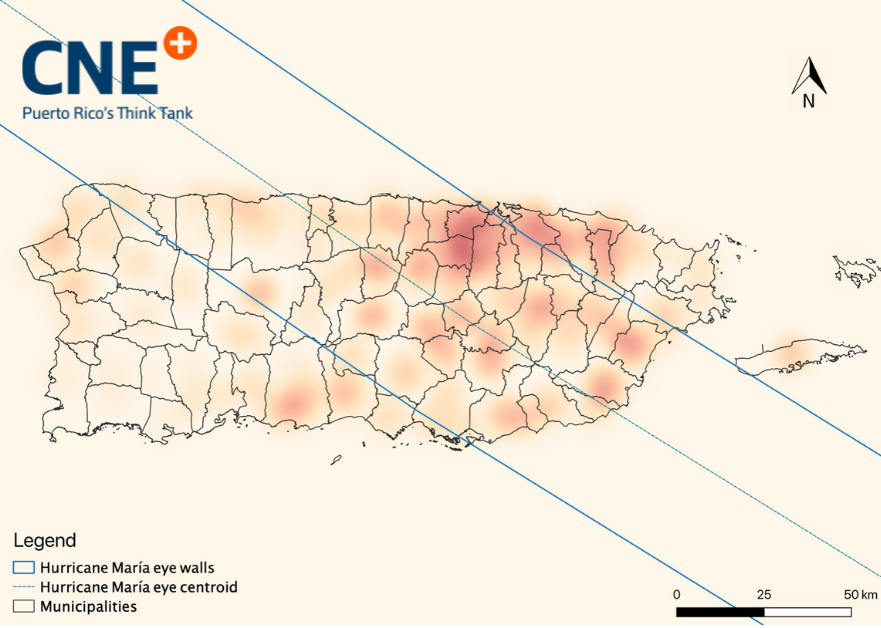 Overall, poor households and those living in Special Communities were not likely to be excluded from receiving emergency aid. In fact, they were more likely to have been inspected and receive monetary assistance. But CNE did find that land tenure status matters, and is a major factor to determine the likelihood that an applicant household can access FEMA funds. Applicants with what FEMA terms “unknown tenure” fare worse off than homeowners.

Particularly notable was the relationship between poverty and “pending housing need”—which is the difference between the FEMA damage estimates and the FEMA award given to an applicant—. Interestingly, households under the federal poverty line had higher pending housing needs compared to non-poor households. This is particularly worrisome because poor households are less likely to receive other forms of aid in the immediate period following a disaster, like SBA loans, and are thus left in a temporal limbo and susceptible to displacement, until other major reconstruction programs come on line.

Previous studies on disasters and long-term housing reconstruction in the United States show that the recovery process of neighborhoods evolves in a highly unequal manner within cities. Research conducted in Miami, Galveston, and New Orleans demonstrates that natural disasters are followed by high rates of housing market volatility, property abandonment, and gentrification waves. Considering that disasters can affect housing markets and lead to neighborhood change, with this research project, CNE identified whether these kinds of local-level transformations were observed in the San Juan Metropolitan Area (SJMA) following Hurricane María. Our analysis centered on neighborhood changes, their relationship with storm impacts, and the spatial distribution of opportunities—namely, access to jobs, education, and safety.

Our results, published in the Lincoln Institute for Land Policy working paper series, show that:

(2) Storm impacts are also associated with higher housing prices and sales in certain areas. Rent increases were also observed in neighborhoods with a higher percentage of damaged units.

We also created an opportunity score that ranks neighborhoods in the SJMA given their access to jobs, education, and safety, and tested the relationship between the score and measures of neighborhood change.  This exercise revealed that access to opportunities is closely related to increases in housing prices, socioeconomic segregation, and vacancy rates. These research findings have numerous policy implications for the post-disaster reconstruction process.  For example, given that housing in high-opportunity areas is increasingly less tenable for low-income households, the government of Puerto Rico should prioritize locating affordable units, financed with federal recovery dollars, in these areas. At the same time, low-opportunity areas should be given priority for infrastructure improvements, community lifelines, hazard mitigation, workforce development, and local business aid spending programs. 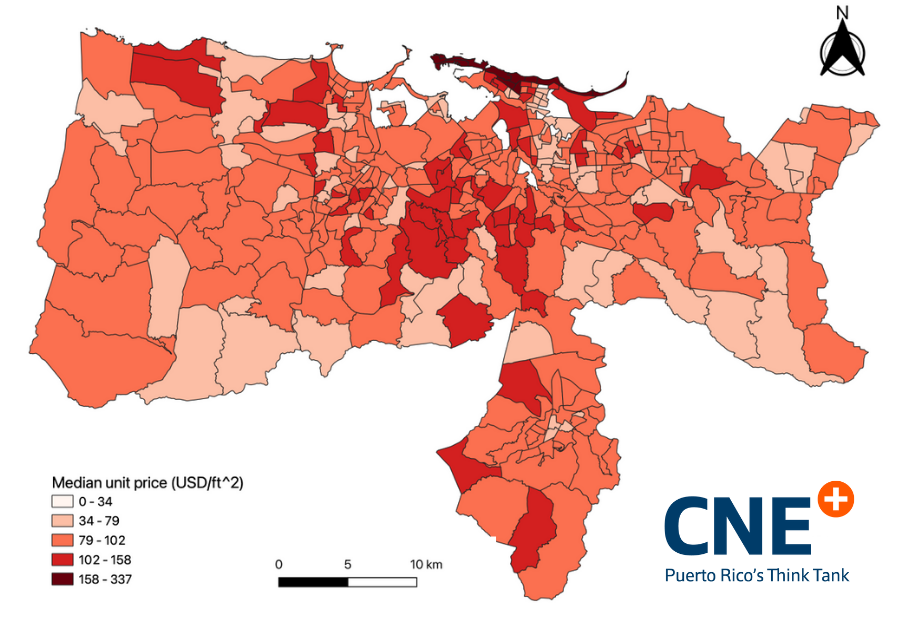 Building on the research conducted on FEMA’s Individual Assistance Program, CNE is currently working on a project—in collaboration with Elora Lee Raymond from Georgia Tech’s School of City and Regional Planning—that examines the relationship between post-disaster reconstruction efforts and migration patterns in Puerto Rico. Academic inquiries regarding population movements following Hurricane María have yielded estimates that range from over 400,000 persons leaving the island, to just over 120,000 individuals moving out in the year following the catastrophic event. While these studies paint a broad-brush picture of movement and population loss, they do not provide a detailed understanding of the migration push factors, including those related to pre-storm vulnerabilities, storm exposure, damages, and federal response, at the community or neighborhood level. We tackle these issues through an in-depth analysis of three primary sources of data: the Federal Reserve Bank of New York/Equifax Consumer Credit Panel data, FEMA Individual Assistance applicant records, and the 5-year estimates from the Puerto Rico Community Survey.

Although we’re still fine-tuning our statistical models, we’ve found interesting patterns regarding post-disaster moves. To give you an idea of the overall trends, the overwhelming majority of people in our study sample did not move following hurricane María. However, of those who moved, most did so within their municipality. A smaller proportion moved within Puerto Rico but outside their municipality, and an even smaller percentage moved outside the island. This confirms the findings in the academic literature which suggests that most moves following a disaster are short distance. With regards to returns, the trends show that most of those who moved do not return to their community of origin after two years.

CNE’s most recent research project is an in-depth examination of the short-term rental market in Puerto Rico. Over the past five years or so, numerous press reports and community advocates have been highlighting how increases in rents and housing prices are contributing to gentrification pressures and the displacement of long-term residents, especially low- and moderate-income neighbors. Building on our work on “geographies of opportunity”, which demonstrated that Hurricane María was an inflection point that has led to significant changes in Puerto Rico’s housing markets, we are interested in gaining an in-depth understanding of how the rapid expansion of short-term property rentals (through platforms like Airbnb, Home Away, etc.) has contributed to distinct neighborhood changes in a growing number of communities. Our goal is to provide some general trends and patterns, from 2014 until before the global pandemic struck, and carefully assess how these kinds of real estate investments are contributing to gentrification and displacement pressures.

Some early results of our analysis show that for every 10% increase in the total number of units dedicated to short-term rentals in a neighborhood: 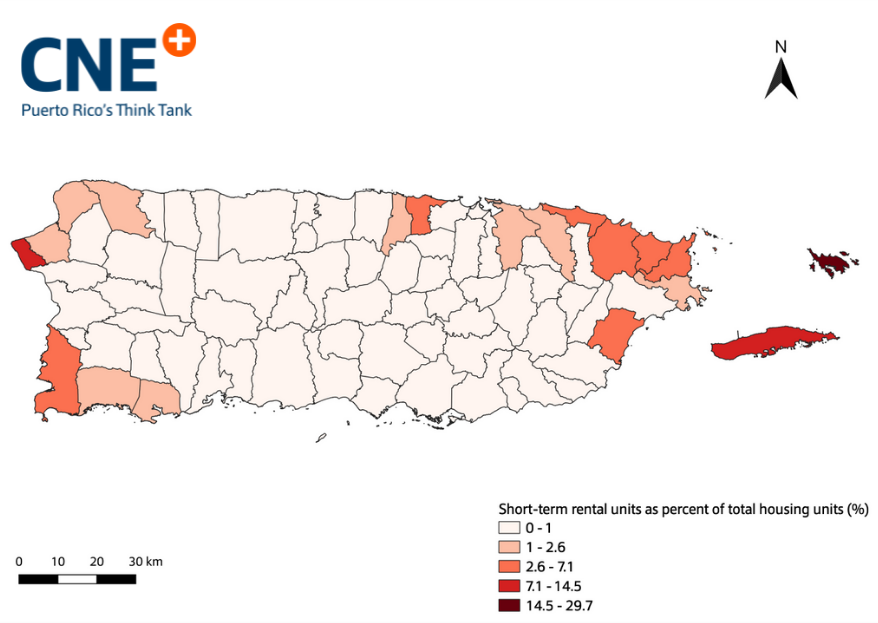