On January 27, 2022, the Fiscal Oversight and Management Board (“FOMB”) for Puerto Rico certified a new Fiscal Plan for Fiscal Year 2022. The main objective of revising the Fiscal Plan was to adapt it to the terms and conditions outlined in the Plan of Adjustment for the Commonwealth of Puerto Rico confirmed by Judge Laura Taylor Swain on January 18, 2022.

In this edition of the CNE Review, we highlight some of the most important components of the Fiscal Plan, including:

Finally, don’t miss out on the Note from the Editor.

Selected Highlights of the Fiscal Plan for Fiscal Year 2022

The revised Fiscal Plan includes changes to both revenues and expenses and also includes the debt service on Puerto Rico’s restructured debt according to the Plan of Adjustment. The chart below shows the most important changes to the expected surplus relative to the prior version of the Fiscal Plan in 2021. Click here for an analysis of the most significant changes. 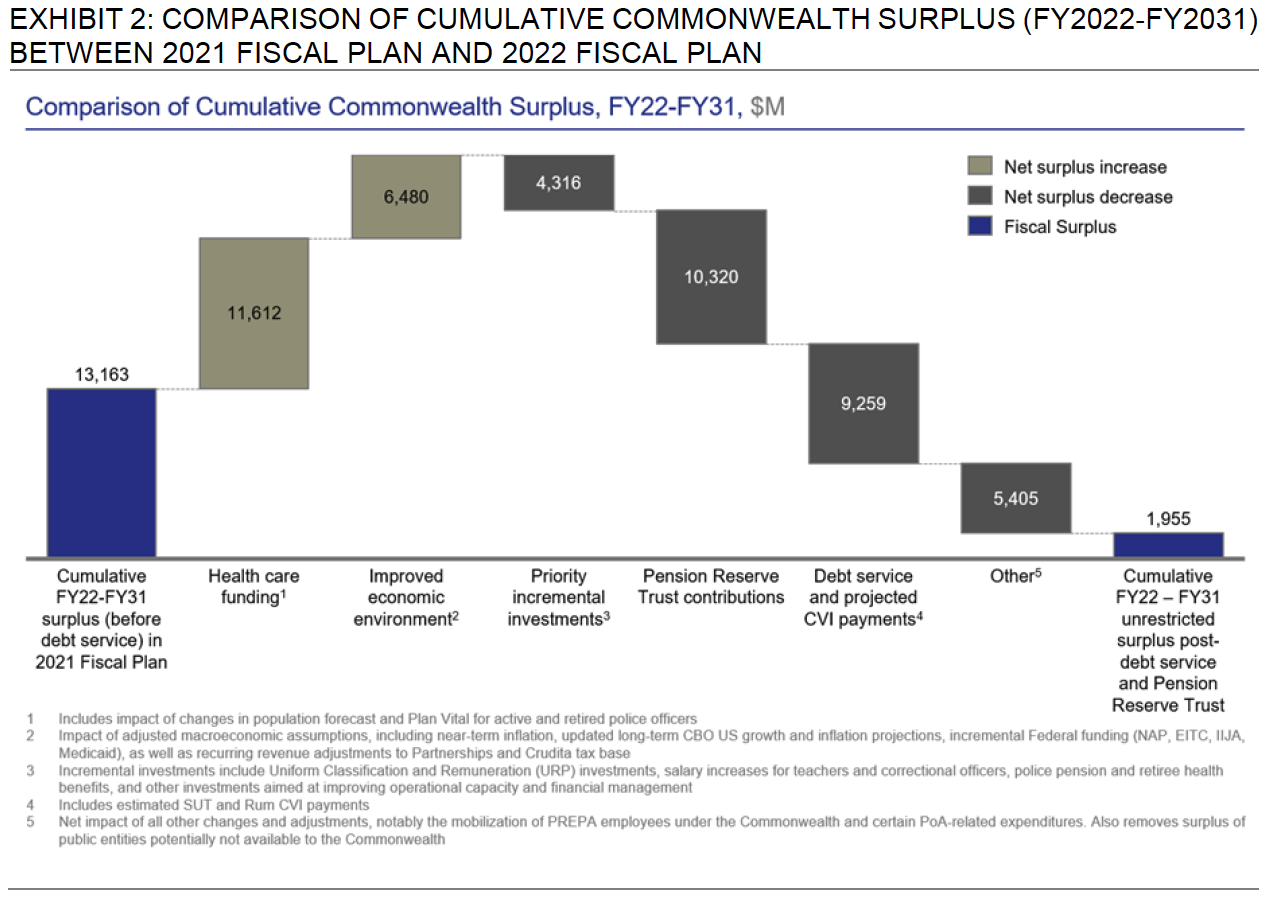 Expected unrestricted surpluses at the end of the next five fiscal years are estimated to average $190 million per year. This means the government of Puerto Rico has very little leeway if actual revenues are substantially below expectations, expenses significantly exceed the budgeted amount, or a combination of both lower revenues and higher expenses occurs.

Click here for a detailed breakdown of the projected costs associated with the Plan of Adjustment.

The Fiscal Plan for FY22, just like previous iterations, incorporates the effects of structural reforms in the areas of (1) human capital and welfare benefits, (2) K-12 education, (3) ease of doing business, (4) the power (energy) sector, and (5) infrastructure that, according to the FOMB, “will enable Puerto Rico to begin to grow again based on competitiveness, countering the negative growth trajectory that has plagued the Island for over a decade, and reducing the dependence on federal funds to stimulate economic development.” The chart below recaps the FOMB’s estimated impact of these structural reforms. 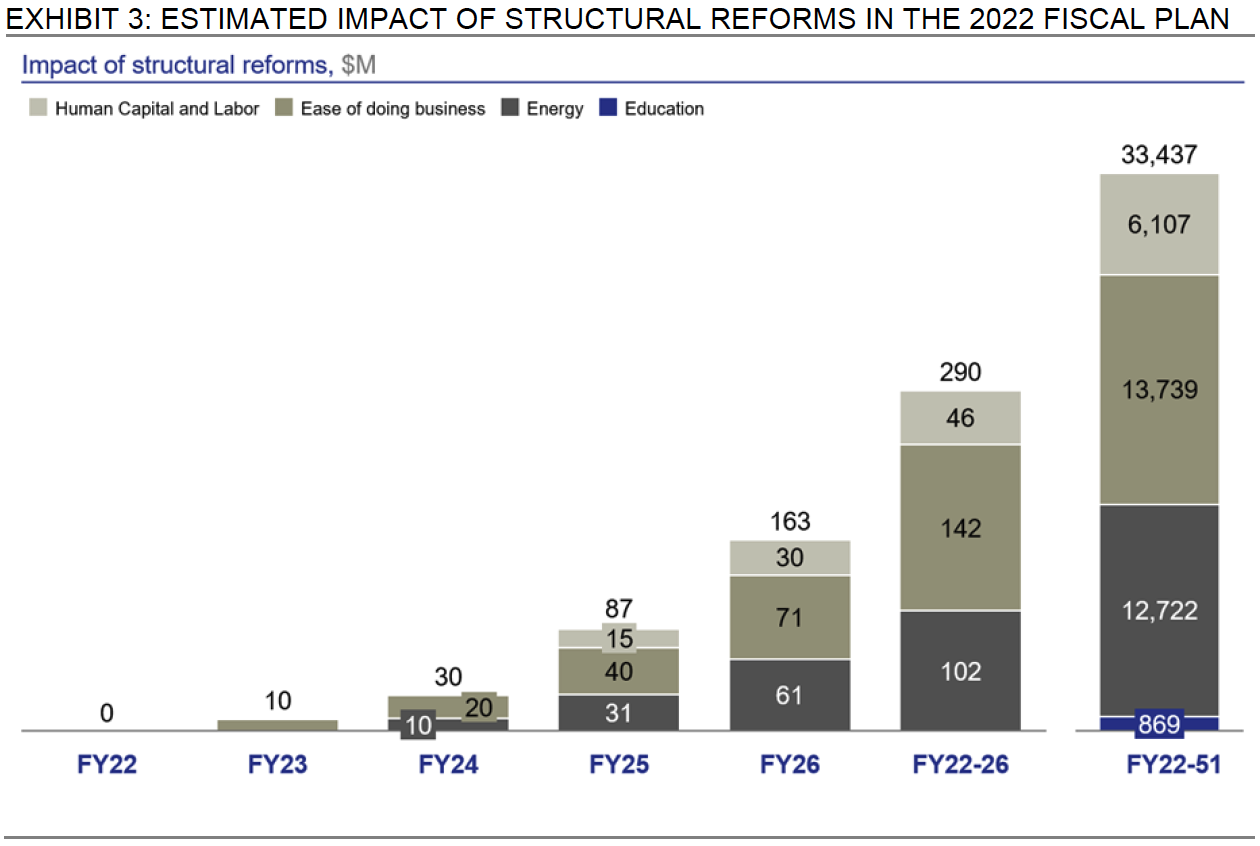 However, the structural reforms favored by the FOMB and set forth in the Fiscal Plan are second-order issues and will not generate the economic growth Puerto Rico requires, both for increasing the living standards of its people and to pay off its restructured debt, unless they are embedded or framed within a larger economic strategy or vision.

Click here for more on why these policies usually do not yield the widespread growth its proponents promise.

The Plan of Adjustment decreases the government’s obligations by approximately 48%, without taking into account potential recoveries through payment on the Contingent Value Instruments (“CVIs”). Total debt relief, then, is significant but not as high as the FOMB claims, nor is it as low or trivial as the detractors of the plan allege. The chart below summarizes the debt recovery by creditor type. 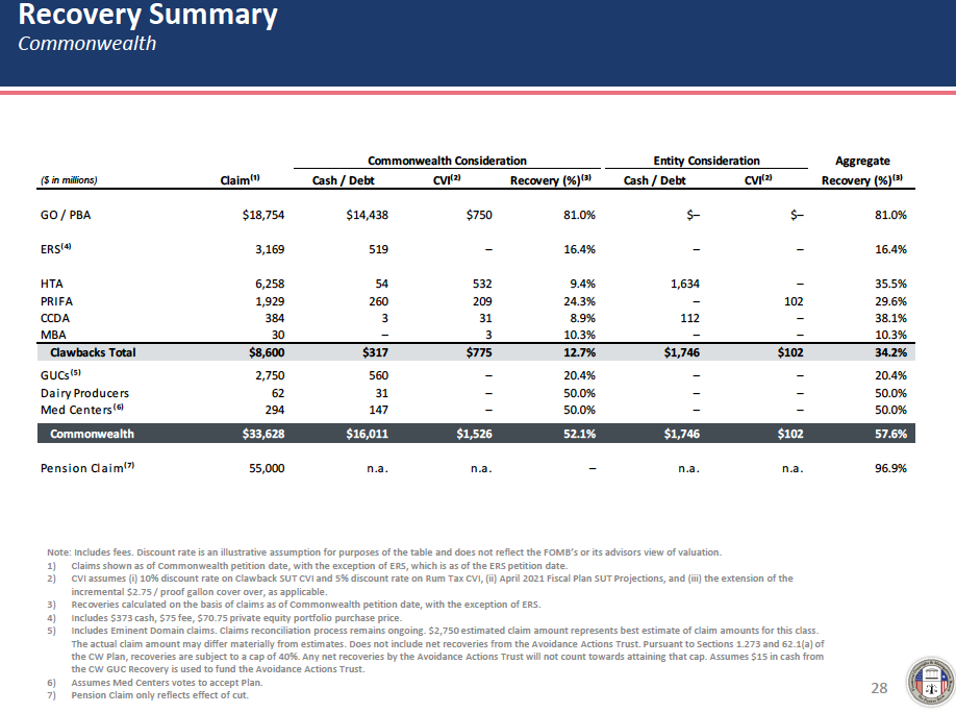 Perhaps more important, from an annual budgeting perspective, the Plan of Adjustment reduces GO debt service considerably from a pre-PROMESA annual average of $1.33 billion to a post-restructuring annual average of $666 million. Total GO/COFINA debt service never exceeds $1.15 billion, or approximately 1.6% of FY21 GNP, during the next 30 years.

Also noteworthy, the 2022 Fiscal Plan “does not anticipate the Commonwealth borrowing for any purpose over the next five years.”

Click here for a list of debt management concepts included in the Plan of Adjustment to limit further indebtedness in the future.

In September 2021, the Centers for Medicare and Medicaid Services (“CMS”) issued an interpretation of the Medicaid funding cap provision for Puerto Rico that, among other things, increased the allotted cap for FY2022 to $2.943 billion.

The FOMB considers the CMS administrative interpretation to be a “long-term solution for Medicaid funding for the Commonwealth.” We respectfully disagree for the following reasons:

Finally, the reduction in the amount required to be budgeted for Medicaid has “liberated” approximately $800 million which has enabled the legislative assembly to revert to its old profligate ways. In our opinion, those funds could have been put to better use by creating a budget stabilization fund or to restore, at least partially, the General Fund allocation for the University of Puerto Rico.

The Fiscal Plan has been amended to reflect certain reforms made to Puerto Rico’s retirement plans. The costs/savings associated with these reforms are outlined in the chart below. 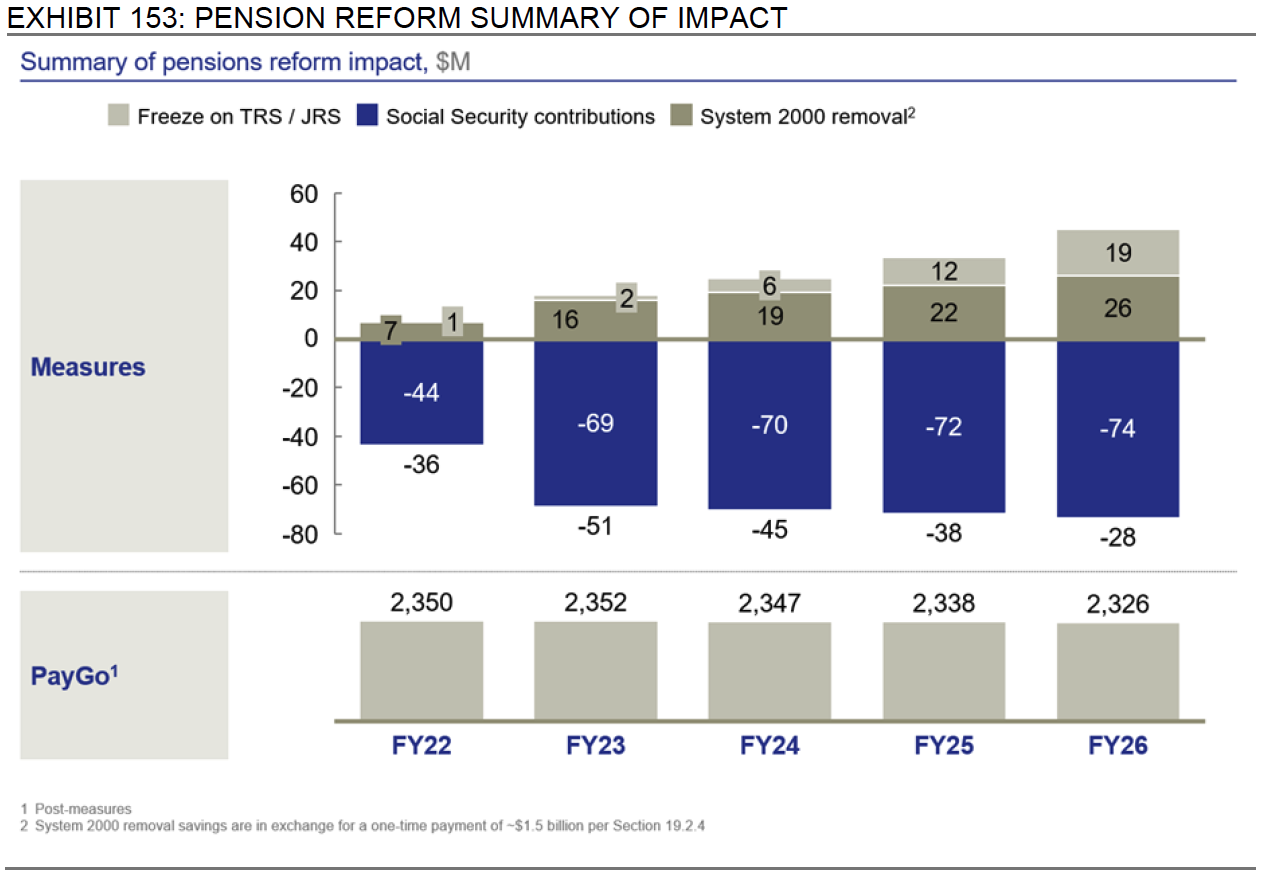 Total pension costs (PayGo plus trust deposits) during the FY2022-FY2031 period will average more than $3 billion per year. This means pension-related payments will be the largest single General Fund expenditure item during this ten-year period.

To be clear, we are not arguing in favor of reducing pensions. We do want to highlight, though, that this $3 billion per year is the cost we are paying now due to decades of mismanagement, for the many years government agencies failed to make the required pension contributions, and for the multiple times that the central government “borrowed” from the retirement fund and never repaid the “loan”.

Click here for details on the pension reforms and tradeoffs included in the Fiscal Plan.

Perhaps no other government agency’s funding has been cut as much as the budget of the University of Puerto Rico (“UPR”). The UPR’s General Fund allocation has been reduced by $445 million, or 48%.

It is difficult to understand this massive reduction in the General Fund appropriation for the most important higher education institution in Puerto Rico. Some argue that the budgetary reduction is justified by the reduction in student enrollment. However, a quick look at the data demonstrates this is a false statement. According to data released by the UPR, student enrollment has decreased from 46,325 during FY 2017 to 35,623 during FY22, a reduction of 23%. The 48% reduction in General Fund appropriations is, therefore, completely disproportionate to the decline in enrollment.

Furthermore, if the FOMB is really counting on improving human capital in Puerto Rico as an engine for growth in the future, then dismantling the UPR is outright counterproductive. Therefore, we recommend that, if the projected savings in the contribution to the operation of the Medicaid program are in fact realized, at least a portion of the funds that become available be allocated to the University of Puerto Rico.

Note from the Editor

“They Have Learned Nothing and They Have Forgotten Nothing”

The title phrase is traditionally attributed to French statesman Charles-Maurice de Talleyrand, in reference to the obdurate behavior of the restored Bourbon dynasty after the fall of Napoleon. After the Revolution of 1789, the subsequent terror of the Jacobins, and the rise and fall of an emperor who sought to conquer half of Europe, the reinstated monarchy pretended to rule as if nothing had happened, picking up things just where they left them in 1789…with predictable results.

In recent times, the phrase has been used to characterize politicians and policymakers who seek to stand athwart history, insisting against all advice and evidence on preserving the disastrous ways of the past, seeking to stop political and economic change at all costs, just to end up repeating the same mistakes of old. History shows such folly can be quite expensive, in terms of both blood and treasure.

Unfortunately for Puerto Rico, we have recently seen a set of political “leaders” demonstrate that they have learned nothing and forgotten nothing since the governor of Puerto Rico declared our public debt to be “unpayable” in 2015. After seven years of default, bankruptcy, federal legislation that stripped away Puerto Rico’s capacity to develop and implement fiscal policy, the imposition of an unelected oversight board, and a prolonged court-supervised process to restructure Puerto Rico’s debt, a group of legislators is acting like they have learned nothing from that experience.

The Puerto Rico Legislative Assembly recently considered House Joint Resolution 278 to implement changes to the current budget in light of the approval and certification of both the Plan of Adjustment for the Commonwealth government and the Fiscal Plan for Fiscal Year 2022. Among other things, we have seen the return of pork-barrel politics, the use of non-recurrent funds to cover recurring spending, and the reallocation of funds earmarked for the public health plan based on the mistaken premise that the Biden Administration has devised a permanent long-term solution for funding Puerto Rico’s Medicaid program. They clearly have learned nothing and forgotten nothing.

To be fair, the executive branch is not exempt from this affliction either. Witness the fiscal gimmicks it has implemented to fund a salary increase of $1,000 per month for public school teachers. Just to be clear, we do not oppose increasing the salaries of public school teachers. The Fiscal Plan for FY22 actually included funding for a permanent monthly increase of $470 per month (in two phases). What we oppose, because it is just plain bad policy, is using non-recurring funding from the American Rescue Plan Act (“ARPA”) to top-off the increase to $1,000 per month for only two years. What happens then in 2024? Again, learned nothing, forgotten nothing.

Finally, don’t be surprised if you hear politicians in Puerto Rico start using the phrase “this time is different” in the context of Puerto Rico’s public finances. As Carmen Reinhart and Kenneth Rogoff state in their book, This Time is Different: Eight Centuries of Financial Folly, “the most commonly repeated and most expensive investment advice ever given…stems from the perception that ‘this time is different’”. Indeed, the single worst thing we can do as we start to turn the corner out of bankruptcy and the hurricane reconstruction efforts begin in earnest, is to return to the ways of the past, the ways of accounting shenanigans, deceptive budgeting, and unrealistic economic growth and revenue projections, because “this time is different”. It never is.

CNE in the News

Click the video below to watch Sergio M. Marxuach’s participation in a recent installment of Jay Fonseca’s series “Los Datos son los Datos” where they discussed the new Fiscal Plan and its impact on Puerto Rico.